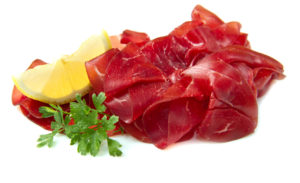 In 2016, almost 12,700 tonnes of Bresaola of Valtellina PGI were produced, with a growth of + 3.2% over the previous year and of +43% compared to 2000. According to a research realized by Doxa for the Consortium for the Conservation of Bresaola of Valtellina, one out of three Italians eats it especially at dinner (34%), the 19% prefers it for lunch, while 28% of the sample consumes it for lunch and dinner.

Almost everyone, however, eats it always the same way and knows only 2 or 3 recipes. Starting from this idea, "Bresaola Inedita" (www.bresaolainedita.it), the web app of the Consortium for the Conservation, was launched on April 19th. It is designed to tell the thousand faces of a thin and eclectic cold cut, to be interpreted in a contemporary way, with lightness, exoticism and experimentation.