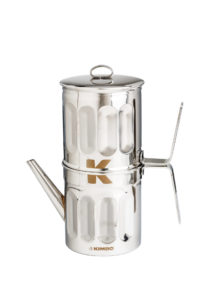 Last month  Kimbo was a real protagonist in Paestum during a two-day event addressed to gourmet professionals, the tenth edition of LSDM, the international cuisine conference dedicated to Mozzarella Bufala Campana PDO, organized by Formamentis with the direction of Barbara Guerra and Alberto Sapere. The 2017 edition dealt with the aging issue between "Quality and Quantity", opening up a confrontation to see if these two concepts really coexist in the same enterprise.

The guests of the event had the chance to discorver Kimbo coffee at the cafe of Grand Hotel Savoy Beach, with tastings of the various Kimbo blends in the compositions of the "coffee designer" Carmine Castellano. On April 19, there was also a Master Class where the traditional Neapolitan coffee machine was revisited in an innovatCarmine Castellanoive way to propose new taste and taste experiences .

On  April 20, the second stage of Emergente Sala was held,  an award aimed at enhancing the irreplaceable work of the room service and open to young waiters under 30. Kimbo, even on this occasion, decided to marry the initiative in support of the best talents. Competitors have all been trained by the Kimbo Training Center and used the Neapolitan Cuccuma for table service.