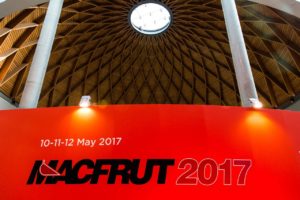 Macfrut and AOP Piemonte, the consortium that gathers the main industry organizations in the sector of the region, are going to work together to promote abroad two products of excellence of Italian fruit, red apple and Piedmont kiwi through the industry's leading trade fair.
AOP Piemonte "chooses" Macfrut as a national fair on which to converge its activities for the development of the apple and kiwi chain of its associated companies.

At the same time AOP Piemonte will represent Cesena Fiera (Macfrut's organizer) as the point of reference and the interlocutor with the companies in the apple and kiwi chain of that area. Four key points of the agreement. First of all, AOP Piemonte’s participation in Macfrut's missions in foreign markets in 2018, scheduled in Africa, Asia and Latin America. Secondly, the organization of events and workshops for the enhancement of its own chain. The participation of Piemonte’s associated companies in bilateral business meetings with foreign operators, during the fair. Last, the collaboration on the organization of the chain's activities in international fair events.

The international development of Cesena Fiera consolidates with the second edition of Mac Fruit Attraction MENA (Middle East North Africa), hold in Cairo from the 22nd to 24th of April. The fair is the synthesis of Macfrut and Fruit Attraction, to offer Italian and Spanish fruit and vegetable trade operators an opportunity in a market of 425 million people with a domestic product gross of 3.1 billion US$.

Most of the visitors came from Saudi Arabia, Jordan and the United Arab Emirates, where Italian and Spanish exports grew considerably.

The fair is organized by IFP, part of Food Africa, the biggest food show of the continent. There were 88 international fruit companies worldwide that had taken part to this second edition, coming from Italy, Spain, Greece, France, Nigeria and Egypt. The fair offered participants a meeting program with 400 international buyers from 50 countries.