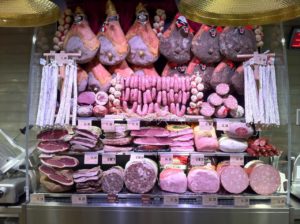 With a total exported value of nearly 1.38 billion Euros, Italy has won the world leadership for exports concerning pork meat preparations and preserves, surpassing Germany. The historic overtaking took place mainly thanks to the growth in the share held by Italy in the first three target markets - Germany, France, and United Kingdom - which, in total, represent nearly half of the value generated by export sales of our salami and cold cuts.

Raffaele Borriello, General Manager of Ismea, who attended the General Assembly of Assica, the Association of Producers of Meat and Salami, said: ‘Italian salami and cold cuts win the competitive comparison, although they are positioned on a high price range, in the premium segment. However, the competitive scenario is more articulated and, above all, there are significant expansion prospects also in view of the opening of two major markets, such as the USA and Canada, as a result of the overcoming of important health barriers. The case of Japan, too, is significant, as this Country in 2016 reduced overall purchases of salami and cold cuts from abroad by 8%, while the flows from Italy increased by 7%; this is a sign of competitive ability, able to push even beyond market-target trends’.

In addition, the analysis carried out by Ismea points out as Germany has increased its purchases from Italy (+ 4%), at the expense of Spanish competitors (-3%), and that in France Italian salami and cold cuts have gained ground (+ 7%) in comparison to German producers (-7%). Altogether, over the past five years, Italian exports concerning pork meat preparations and preserves have grown by 27% in value: more than half of them are matured hams (692 million Euros in 2016). With just under one third, salami and sausages (417 million Euros in 2016) follow, as well as cooked hams, with 10% share in value (134 million Euros in 2016).