"Veronafiere has always been an example of attention for China, of entrepreneurial dynamism, creativity and quality. The inauguration of its permanent headquarters, after 20 years of presence, is part of a context of new Chinese openness". This was stated by the Ambassador of Italy to China, Ettore Sequi, at the inauguration of the Veronafiere permanent headquarters in Shanghai.

VeronaFiere thus strengthens its presence in favor of strategic brands in the Italian supply chain: wine, marble and construction, agritech are the assets in the portfolio of the Verona-based Spa, which now intends to keep the country of the Dragon on a permanent basis. For the president of Veronafiere, Maurizio Danese: "There are more than 5 thousand Chinese operators participating at Marmomac, Vinitaly and Fieragricola in a multi-polar internationalization process. The aim - he continued - is to favor the business through costant action and presence".

"China - said the general manager of Veronafiere, Giovanni Mantovani - today is a market of 1,600 billion euros, a figure destined to grow by virtue of the openness of the Chinese government, as also mentioned by President Xi Jinping at the opening of the China International Import Expo, reaffirming its commitment to free trade and globalization of the economy. An opportunity that must also be accepted with responsibility by our country, which today is only the 22nd supplier of Beijing, with a value of 18 billion euros in 2017". 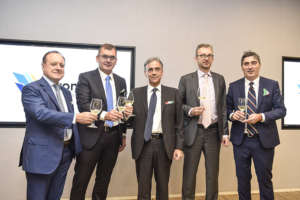