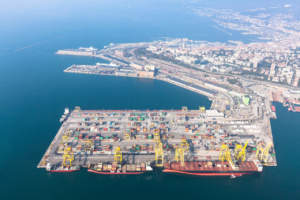 The port of Trieste

Infrastructures make the difference. And the same does a careful and far-sighted management, which is marking a watershed in contemporary intermodality. So, today the Port of Trieste - in the 14th place in the ranking of the best European ports before Constanta (Romania), St. Petersburg (Russia), and Genoa - is firmly at the head of Italian ports as for goods traffic and it is ready to compete with the northern European ‘giants’ (Rotterdam, Antwerp, and Hamburg) thanks to the very recent signing of the decree implementing the international free port.

Within the port of Trieste there are two areas and terminals dedicated to storage and handling of refrigerated products, especially fruit and vegetables: in the New Commercial Port and in the Industrial Port. The activity in this sector dates back to the early Seventies, with Citrus Marketing Board for citrus fruits from Israel, Chiquita bananas from South America, and Kiwi Marketing Board for kiwis from New Zealand, with the consequent business activity, especially concerning repackaging and, above all, marketing.

In the terminals of the New Free Port 51,500 square meters of warehouses are present: 18,200 of them are refrigerated. Further 200,000 square meters of storage squares are added, connected directly by rail and highway to the main traffic routes and the main logistics hubs of central and northern Europe. Here, Samer Group - a historic maritime Company that has been operating in Trieste since 1919 - mainly deals with import activities for many different types of goods: potatoes (over 49.2 million kilos only in 2016), hazelnuts (over 6.7 million kilos), coffee (one of the flagships for this territory), but also oranges (4.3 million), onions (2.8 million), apples (2.3 million), and bananas (1.4 million). With values ​​of less than one million kg per year, garlic, cherries (over 21 thousand kg), spring onions (38,700 kg), ice creams, pomegranates (66,500 kg), vegetables (60,100 kg), grapes (253,800 kg), pumpkins (189,000 kg), and sugar follow.

Goods come mainly from such Mediterranean Countries as Egypt, Cyprus, Turkey, and Israel, but also from such more distant markets as South America. They reach the terminal in containers, are unloaded and stored in cold storage until the time of distribution - which happens by truck - especially in Italy, Germany, Austria, Poland, Hungary, the Netherlands, the Czech Republic, and Slovakia, with regular traffic throughout the year and for which the terminal also offers such complementary services as customs clearance and phytosanitary checks.

Industrial Port: new investments are ready to implement the handling capacity. In the Industrial Port, the terminal has two refrigerated warehouses that, until the end of the Nineties, were used for storing frozen fish from Japan. Later they were converted and today they are equipped with 4,100 pallets with maximum capacity of a thousand kilos each: for a decade the warehouses of the Industrial Port have hosted a regular traffic of hazelnuts already shelled, which from Turkey reach the terminal in containers, are unloaded and stored, and then they leave Trieste to go by truck; Germany is their main final destination. All this is accompanied by the project of further expansion aimed at optimising the railway activity and for the benefit of the movement of refrigerated goods: in fact, Samer Group informs that the installation of 60 reefer container plugs is planned in the spaces adjacent to the warehouses. Total investment: 12 million Euros.

Advantages
The port of Trieste is the deepest of the Mediterranean. President D'Agostino, who in addition to leading the Eastern Adriatic Authority (which includes the airports of Trieste and Monfalcone) last April was elected President of Assoporti, underlined: ‘With its 18 meter natural draft, it is a landing able to accommodate any type of boat, including those 'mega ships' that respond to the phenomenon of gigantism characterising the current world of navigation, not only the circulating one, but also that currently in the works. Another flagship is the network of intermodal and rail links, in particular: 70 km of tracks serve all the quays, making it possible to compose trains directly in the terminals. D'Agostino confirmed: ‘In 2016 we recorded our highest number of trains, 9,000, but we can still grow’.

The new logistics terminal is coming
Investments and planning to realise the first ‘free zone’ in Europe, but not only this: ‘100 million Euros have already been financed to upgrade the railway connections to and from the Trieste airport and increase the traffic volumes, but we will continue to invest for the reorganisation of the railway component, reducing time and costs. Our building site is perhaps the most impressive one that was put in place: by the end of 2018 the new logistic terminal of Trieste, too, will be operative, for a total investment of 132 million Euros’.