Home » Italian lifestyle » Amazon is a healthy food fanatic? An idea we already had in Italy

If Amazon focuses on organic food with the motto Healthy but fun to eat and buys the Whole Foods product chain, this philosophy in Italy took root some years ago. The idea of a healthy and delicious cuisine already existed in Italy, in Parma, where there is the first Academy of Culinary Nutrition, which, based on rigorous scientific research, has rewritten menus, recipes and diets to make them tasty and healthy, without the obsession for the organic, “that - as explained by the founder and creator of this new way of eating healthy, Chiara Manzi, is not a magic wand”, nor is a guarantee of a healthy diet. It is called Art Joins Nutrition Academy and starred chefs and great scientists work in its laboratories. They are the ones who, for example, have invented a tiramisu recipe that has less sugar and more fibers than an apple without cutting mascarpone, coffee, eggs and their respective nutrients. 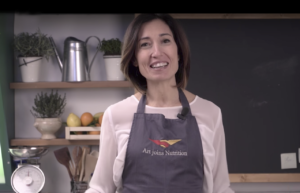 “It’s all about science -explains Chiara Manzi-. Jeff Bezos, CEO of Amazon, is right when he says that healthy eating must also be fun and exciting, but he’s wrong on one point: it is not enough to choose organic products”. At the base there must be, however, a careful study of how food is dosed, combined and assimilated within our body and how it is cooked.

The Academy directed by Chiara Manzi has studied for years how nutrients and their effects vary on our body, depending on how they are cooked, processed and combined, to create a tasty and rich anti-aging wellness. In short, the Amazon philosophy of a healthy and tasty cuisine, is right, but is likely to be just a slogan. It is not enough to buy organic to eat healthy.

“The real magic wand is the correct combination, the right quantity and the right cooking method of each food”, explains Chiara Manzi, and if behind her recipes there is a huge scientific and research work, for those who want to try to cook in a healthy and tasty, there is a book called Evolution Kitchen. BuonaDaVivere!.