Home » Dairy & cheese » Cau&Spada: gardeners in the hills of Marche 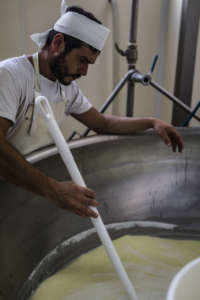 In the beginning, they were just a label: ‘Cau&Spada pecorino cheese’. Pecorino cheeses, fresh in spring and seasoned in winter; one hundred and twenty sheep, directly from Sardinia as an investment made by a grandfather to start the activity ‘on the mainland’, and three shepherd dogs, including Capo (Head), adored playmate between stable and dairy.

Emilio Spada was born in 1983, ten years after his parents - Antonino Spada and Sara Cau - settled in Marche region, at Sassocorvaro, a small town in the province of Pesaro Urbino in the heart of Montefeltro, along Foglia river. For as long as he can remember, he has lived ‘that marvellous alchemy that turns milk into cheese’. This is how this romantic shepherd, son and grandson of practical people who have always been dedicated to sheep farming, calls this process.

Beyond the numbers, what is clear is that the kid who started to wash cheeses and develop his first creations when he was just 15 year old, today is a man with twenty years of experimentation behind him. These experiments continue today, among successes and mistakes, ‘because it is also from these that you learn’, he reveals in all modesty. 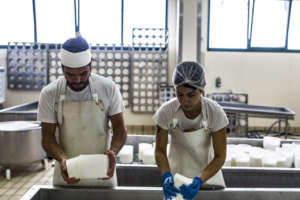 So their product range has been greatly enriched and refined, given the interesting maturations both in the pit and in barrique (between walnuts and marc) and the continuous studies to introduce novelties, new cheeses in the first place, wholly genuine. We are talking about organic products and processed in a non-mechanized way, that is to say by hand.

They have been dressed in a new graphic design since 2010 thanks to Giovanni Cenni: he is keen to mention him. These products can be found in Italy, from the most renowned delicatessen shops to starred restaurants especially attentive to raw materials up to the neighbourhood shops in the most remote areas, where contact with customers is true. In addition, for ten years, abroad, along the road of international market, especially in Europe. 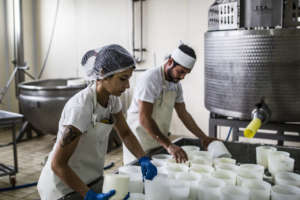 Emilio explained: ‘Many of our products, almost all of them, are sold by reservation». He reminds that now there is no more leftover milk to be marketed, as it happened in the beginning. “We are present in the British market, in London, through The Ham and Cheese Company. And then in Bucharest, Prague, Paris, Germany, and Spain.

Here in Italy, we are at Bottega Liberatiin Rome, La Tradizioneat Vico Equense, Parla come mangiat Rapallo. We work with starred chefs, now friends of ours, such as Agostini (Il Piastrino, Pennabilli), Raschi (Guido, Rimini), Recanati (Andreina, Loreto), Ciotti (Nostrano, Pesaro), and also Rapisarda (Casa Rapisarda, Numana) and Rossetti (L’Angolo Divino, Urbino), just to name a few. And then the country shopkeepers. The true heritage to be safeguarded, a perfect example of mediation among a territory, its small producers, and those looking for a true product that feeds both body and soul”. 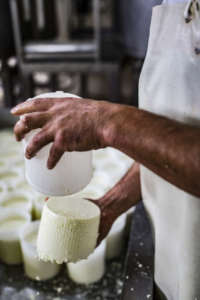 All this thanks to a dozen collaborators (relatives, average age 26) and his hands. He tells: ‘Like an osteopath, I massage the cheeses and feel whey move, even sixty kilos of curd, a very intimate relationship, every muscle in tension. Now a wide range of products is put on the market, all extremely linked to the seasons that the animals live.

Il Pecorino degli Amantiripens in our owned pit and we treat it like a child», he continues with passion, calling himself a purist who wants above all to allow feeling the taste of milk anyway. «And to get to San Giorgiovariety it took me three years. It was born from European contaminations and a mix of three technologies: slightly acidic heart, creamy under-crust, and flowery crust. It is a candy with scents of the forest and aroma of fresh milk.

Or Magnifico, which we once called Magnum: each time, from 250 litres of milk, we obtain two cheeses of about twenty kilos each. And then our Primo Sale, made and sold. Settembrino, made only in September.Robiola, fresh and seasoned. Classic Pecorino: fresh, semi-seasoned, and aged. Ricotta. Our Stracchino Stanco(tired). Barrique e Noci(walnuts), which is refined in osmosis with walnut leaves in contact with cheese, and Barrique and Vinacce(marc), purple cheese that comes from the local marc of Lacrima and Montepulciano grapes’. 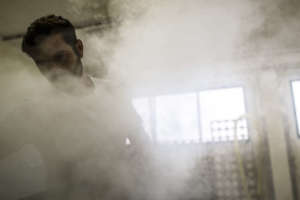 Story of a great friendship

It all began in the '70s thanks to his grandfather, whose name was Emilio Spada, just as his one. And it is ‘the story of a great friendship’, the one between Antonino Spada and Antonio Cau (who will later marry his sister, Sara), who migrated from Sardinia to Marche to look for fortune, ‘not without difficulty, with sweat, but always with the light of enthusiasm in their eyes’.

Emilio Jr concluded: ‘Our greatest asset are these lands, which my parents have never stopped acquiring: woods, meadows, and fields. A direct investment in the territory. Because that of us Sardinian shepherds is the story of a beautiful immigration. Here we have become the gardeners of these hills. These are lands that will remain for our children and theirs, and it is our moral duty to regulate forest, agronomic, and zootechnical practices in these protected oases. We must leave these places where we are lucky to live intact, even better’.