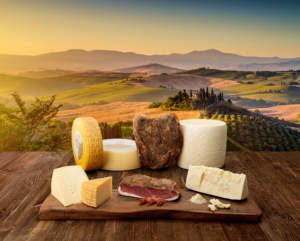 Asiago cheese, ‘Speck’ deboned, salted and smoked ham and Pecorino cheese are the objects of admiration in Brussels, in a synergistic and extra EU work. They became testimonial tutorials on how to manage the EU promotion funds in support of EU food products

Fiorenzo Rigoni, Andreas Moser and Salvatore Palitta, presidents of the Protection Associations concerning Asiago cheese, Alto Adige Speck and Pecorino Romano respectively, said: ‘This new European award, just in a year in which EU aids to Italy for the agri-food promotion decreased by 90% and many projects will not be financed, makes us proud and commits us once again to work in order to make it clear to such important markets for our Country the value and meaning of the European agricultural history and tradition, witnessed by our products’.

Uncommon Flavours of Europe programme, realised by PDO Asiago, PGI Alto Adige Speck and PDO Pecorino Romano cheese, was born in order to help the consumers recognise the distinctive characteristics of the original products, in contrast with the so-called ‘common’, or generic products. Today these inimitable proposals are obtaining increasing interest in USA and Canada, thanks to the growing curiosity and sensitivity expressed by consumers and restaurants for the origin of the products, their qualities, and their use when they meet the local culinary tradition. ‘Uncommon Flavours of Europe’ was recognised as one of the ten Italian projects approved by the European Commission and selected out of 199 presented in the framework of the total allocation of over 30 million Euros, of which 23.6 co-financed by the Union in the three-year period 2017-2019. It was presented last October to more than 100 journalists, chefs and importers as part of Starchefs - International Chefs Congress at the Brooklyn Expo Centre in New York and at the hotel school of the ‘Institut de tourisme et d'hôtellerie du Québec (ITHQ)’ in Montreal.

In the following months, the project started an intense activity of information and promotion of the three testimonial products of European quality by starting a direct dialogue with consumers through the web, social media, press, and TV. In this first phase, in particular, over 350 promotional days were held, for the year 2017 only, out of a total of 1,750 planned in the three-year period 2017-2019, in the points of sale of the major American and Canadian supermarket chains. This activity offered an opportunity to directly contact 2.4 million consumers in the United States and over one million in Canada.

In 2018, the actions of this programme will be developed and intensified also with activities aimed at trade. For instance, this happens with LEARN & EARN competition, dedicated to the professional sector of large-scale retail trade, which offers trips to Italy and an informative road show for operators in different US states. All this has the aim of strengthening the market of European agricultural products, of which Asiago cheese, Alto Adige Speck and Pecorino Romano cheese, the protagonists of ‘Uncommon Flavours of Europe’ project, are representatives of excellence.