Home » Dairy & cheese » Lactose- and gluten-free products, this is the challenge for Trevalli

Andrea Alfieri, marketing manager, explained: “Cooperlat develops its export turnover for 52.4% in non-EU Countries and for the remaining 47.6% in EU Countries. The main channel is foodservice, through specialized importers. We also develop the trade channel (Balkans, Greece in the first place) and several PLs in different Countries. The main products for export are sweetened and unsweetened vegetable cream to be whipped, spray cream, UHT cream, dairy products".

The company was founded in Marche region, in Macerata, in 1960 as Clamj (Centrale del Latte Alimentare Macerata Jesi - Macerata Jesi central dairy), already marketing Trevalli brand, which takes its name from the three valleys of the area (i.e. those of Esino river, Potenza and Chienti) and, on the initiative of Confcooperative Marche, in 1982 it became Cooperalat.

Cooperlat Trevalli is active in the various Italian regional markets with more local brands - such as Latte Cigno, Fresco Marche, Abit, Delta Lat and Migali (the latter is 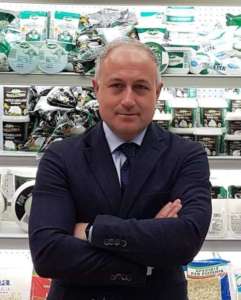 a historic brand of mozzarellas acquired in 2018) - and operates nationally with Trevalli brands and with Hoplà and Hoplà Professional, two brands with which it also deals with exports. It is a name of reference in the market of vegetable products for cooking and pastry and was born in the Seventies. In the Nineties the group pushed marketing on the Hellenic and Balkan market, thanks to a joint venture in Greece, from which Torre Cooperlat in Kilkis was born. Trevalli Cooperlat is participated at 2.74% by Granarolo, and is in fact connected at 20% with Torre Cooperlat Greece, while it controls Fattorie Marchigiane (96.77%), Abit Piemonte (99.82%) and Migali Srl (100%).

From the detail of the product families, from the 2018 budget it emerges that the company turnover is mainly supported by the so-called "special" products (42.8% of the total, which includes vegetable products, cooking cream, spray cream, cream to be whipped, béchamel sauce, and desserts), followed by dairy products (21.2%), fresh products (17.1%), UHT milk (12.7%), and finally marketed ones (6.2%). Focusing the analysis on the sales channel, there is an important relevance of large-scale retail and discount stores (45.4%), followed by the so-called Normal Trade (31.7%), 18.2% exports, catering and wholesale (8.8%), and other (0.9%).

The manager explained: "We are present in the main brands of Italian large-scale retail trade with UHT products (milk, cream, béchamel sauce, desserts, vegetable products) and well distributed even with fresh products in the areas of attempted sale, in particular Marche, Abruzzo, Umbria, Lazio. In Marche region, TreValli fresh milk is a leader with over 60% market share". 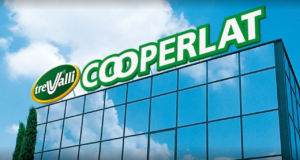 With four production plants and as many distribution platforms, 13 attempted sales (and similar) warehouses, and a research and development centre, the company employs a total of almost 270 people including workers and employees, managers and executives. It is also active in social projects (including, for example, Lega del Filo d'oro). As for the group's next investments, new products and packaging, Andrea Alfieri, Cooperlat Trevalli marketing director, answered concisely: "Lactose-free and gluten-free products, organic and vegan ones. As for packaging: downsizing for consumer products, large formats for foodservice”.