Home » Dairy & cheese » March is the month of cheese in FICO 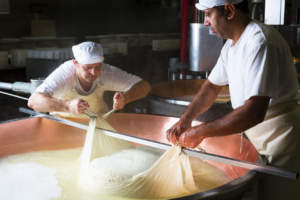 March is the month of cheese. In March FICO Eataly World becomes the place for those who want to know and taste hundreds of Italian cheeses, from the North to the South of the country, now famous and imitated all over the world, hosting the best Italian dairymen and special factories, the goat's pecorino market, tastings, courses and appointments such as the Italian Cheese Awards, the Oscar of the cheese. Many recurring appointments throughout the month of March, such as the FICO Dairy Marathon, scheduled every weekend: accompanied by an Ambassador of Biodiversity, guests set off for a free tour of the Valsamoggia, Grana Padano DOP, La Centrale del Latte and Parmigiano Reggiano factories.At each stage, the cheese makers will tell their business and their product accompanying it with free tastings. The daily production of FICO dairies goes on as well, showing the production process of the products.

There are 12 music events scheduled for the month, such as the concert tribute to Lucio Dalla on the anniversary of his birth, held on March the 4th. There will be also the launch of the Cinema FICO: a film review proposed by the Cineteca di Bologna that will be part of the important events of the Park, starting this month.