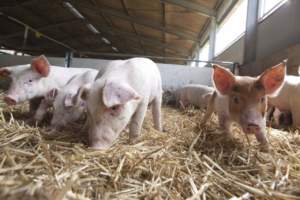 The welfare of pigs in breeding is also measured by their tail. Letting it long is a best practice recommended by the European Commission, which has chosen as testimonial of an information video two of the stock farms by Fumagalli Industria Alimentari (Fumagalli Food Industry); they comply with what is defined in the specification concerning animal well-being.

This video will be used to train breeders across Europe, to limit cutting of tails only in cases of strict necessity. The video, shot between Mantova and Cremona, explains the ethics of this choice and the activities to be done to make it winning in terms of well-being and even of return.

The tail is usually cut to piglets to avoid cannibalism problems within the group, which are precisely manifested with tail bite. At the root of this discomfort there are stress situations caused by various factors, such as high stocking density within the boxes, inadequate ventilation and poor air quality, improper feeding, boredom and frustration due to the impossibility to manifest characteristic behaviours of their species (lack of proper environmental enrichment), poor cleaning of spaces. The challenge of letting the tail is therefore a concern for animals, to ensure that breeding conditions are fit to meet their needs.

Fumagalli, fourth-generation family-owned company for a quarter of a century, has chosen to produce salami and cold cuts focusing on the well-being of animals. This was avant-garde choice in the 90s and is modern today, so much that it represents an Italian excellence to export not only in terms of product, but also as farming system. Its values ​​are shared with consumers through the ethical label.

Arnaldo Santi, marketing manager of Fumagalli, explained: ‘For a long time our company has made a decisive choice for well-being on stock farms. This choice is rewarded by customers and consumers. Today, our example may be of help for other realities to improve living conditions of animals. This road means not only ethics, but also higher product quality’.

Fumagalli Industria Alimentari group, leader in the sector of Italian salami and cold cuts for more than a century, has a turnover of 55 million Euros. 67% of its production is exported to more than 20 Countries, including Scandinavia, the United Kingdom, and Switzerland. These markets are particularly attentive to sustainability and animal well-being issues.